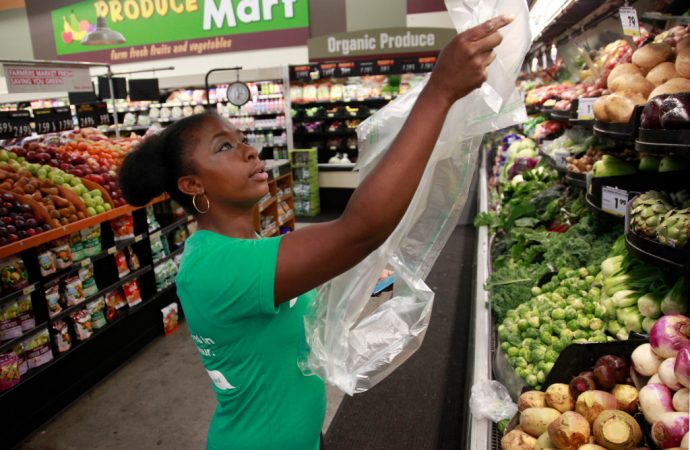 A group of workers who shop and deliver for groceries-to-your-door giant Instacart say it retaliated with a country-wide pay cut two days after workers held a labor action over tips. From Sunday through Tuesday, many of Instacart’s army of non-employee shoppers stopped picking up and dropping off customers’ groceries, in a protest intended to get…

A group of workers who shop and deliver for groceries-to-your-door giant Instacart say it retaliated with a country-wide pay cut two days after workers held a labor action over tips.

From Sunday through Tuesday, many of Instacart’s army of non-employee shoppers stopped picking up and dropping off customers’ groceries, in a protest intended to get the San Francisco company to restore a default 10 percent tip option on the app from the current zero to 5 percent in place since late last year. Some of the rebellious workers also disrupted the company’s app-based operations through such methods as accepting orders and never fulfilling them.

On Thursday, the company announced it was eliminating a $3 bonus that shoppers received for every order getting a five-star customer review.

“Over the last several years, we’ve experimented with numerous versions of the quality bonus, in addition to other boosts and incentives,” Instacart said in a message informing shoppers of the cut. “During the last year, we offered a new version of the quality bonus and found that it did not meaningfully improve quality.”

“This is clearly a retaliatory act,” a group of shoppers said in a Medium post Friday. “The company has made its intentions known — they do not seek to work with us or even attempt to compromise. This is corporate cruelty, plain and simple. Their only goal was to hurt us.”

Instacart on Friday in an emailed statement said removal of the “quality bonus” will take effect Nov. 11. “This change was not a form of retaliation,” a spokesperson said.

The shoppers said loss of the bonus could slash a shopper’s income on some orders by 40 percent. Menlo Park shopper Vanessa Bain, an organizer of the walk-off, estimated that half of customers give five stars.

Instacart declined to say whether it believed scrapping the bonus will mean shoppers get less money for the same work. Other payment structures, including tipping, remain unchanged, the company said.

Bain, who also helped with the Medium post, said Friday that she believes the bonus cut was already in the works, to be imposed among other compensation changes in late January. “I think the timing is undeniably retaliatory, and believe the motivation for moving forward with it ahead of schedule was to discourage workers from continuing to organize,” Bain said. “It seems like a pretty clear-cut intimidation tactic.”

Before the walk-off, which Bain estimated to have included at least half of the 14,000 shoppers in a Facebook group dedicated to pushing back against company pay cuts, dozens of shoppers signed a letter published on Medium that laid out a litany of complaints about reductions to compensation.

In 2016, Instacart replaced a default 10 percent tip option for customers with a 10 percent service fee that customers mistook for a tip but instead funneled the money to the company, the shoppers said in the letter. When Instacart put the tip option back onto the app, it made it hard for customers to find, and “misleadingly” identified it as an “additional tip,” the workers alleged.

As a result of a legal settlement from a class-action lawsuit by shoppers, the company addressed the “additional tip” issue in 2017, then made the tip option prominent again last year, before cutting the default tip in half, Menlo Park shopper and protest organizer Vanessa Bain told this news organization last week.

Also this year, according to the shoppers’ letter, Instacart — which puts its number of shoppers at 130,000 — “quietly rolled out another pay cut” that lowered minimum guaranteed compensation by up to 30 percent in nearly all markets.

In 2017, Instacart, without admitting wrongdoing, agreed to settle the class-action lawsuit by shoppers over alleged improprieties with tips, expense reimbursement, and the service fee said to look like a tip. Last year, CEO Apoorva Mehta apologized after saying his company had withheld shoppers’ tips by accident, because of a bug, but didn’t quantify the amounts withheld.