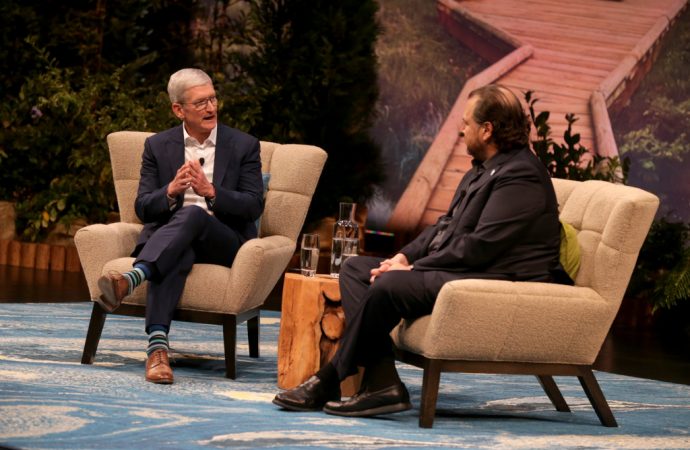 SAN FRANCISCO — Salesforce, which kicked off its annual conference Tuesday, likes to say it is a “different company,” as co-CEO Keith Block noted during the opening keynote. “We’re doing things the right way by doing well and doing good.” There’s another tech giant that’s well-known for thinking “different.” And that company’s CEO, Tim Cook,…

SAN FRANCISCO — Salesforce, which kicked off its annual conference Tuesday, likes to say it is a “different company,” as co-CEO Keith Block noted during the opening keynote. “We’re doing things the right way by doing well and doing good.”

There’s another tech giant that’s well-known for thinking “different.” And that company’s CEO, Tim Cook, sat down for a public conversation with Salesforce Chairman and co-CEO Marc Benioff to talk about a continued partnership between Apple and Salesforce, which includes an updated app for developers who build Salesforce apps on Apple’s iOS.

But they spent most of their time talking about their values during a half-hour session of mutual admiration.

“I don’t even use my computer anymore,” Benioff said. “Everything I need is on my phone. … We learned innovation from you,” he told Cook. The Apple CEO in turn said using Salesforce mobile apps can change the way people do business.

Benioff then allowed Cook to tick off a list of what’s important to Apple and to him personally: innovation, sustainability, privacy, equality.

“We want to be a ripple in the pond,” Cook said. “Equality is very important to us.” He drew applause from the hundreds of people in the crowd for mentioning Apple’s advocacy for Dreamers, the undocumented immigrants brought to this country as children who are are fighting for the right to stay. He talked about gay marriage. “It’s about dignity and respect … the basic way we treat one another,” he said.

Benioff also is known as an advocate for many of the same things. Salesforce is San Francisco’s largest private-sector employer and often touts its philanthropy and commitment to diversity and equality. But like other high-profile tech companies, it is under pressure over the business it does with the federal government.

Earlier in the day, during the morning keynote, Benioff barely had started to speak when he was interrupted by a protester.

It’s unclear exactly what the man said to Benioff — he didn’t have a microphone — but tweets containing video of the protester indicate he was complaining about Customs and Border Protection detaining immigrant families and children. It is not a new protest against the cloud company. Last year, activists brought a makeshift cage to Dreamforce to protest Salesforce’s contract with CBP, which hundreds of the company’s own employees also had protested. This year, activists outside Dreamforce carried signs saying, “Welcome to Cageforce.”

“I’ll give you 30 seconds to speak, then you have to leave,” said Benioff, who on Tuesday came face to face with the first protester near the stage. When the man was done speaking, Benioff addressed the audience: “I value free speech in this country. All voices need to be heard.”

A few minutes later, another protester interrupted him. At least a couple of advocacy groups, Coalition to Close the Concentration Camps Bay Area and Bay Resistance, claimed the protesters on Twitter.

Benioff has defended the company’s contract with CBP, described by employees as helping to manage border activities by the Trump administration. He tweeted last year, in part: “We don’t work with CBP regarding separation of families. CBP is a customer & follows our TOS.” He also said at the time that Salesforce does not have a contract with Immigration and Customs Enforcement.