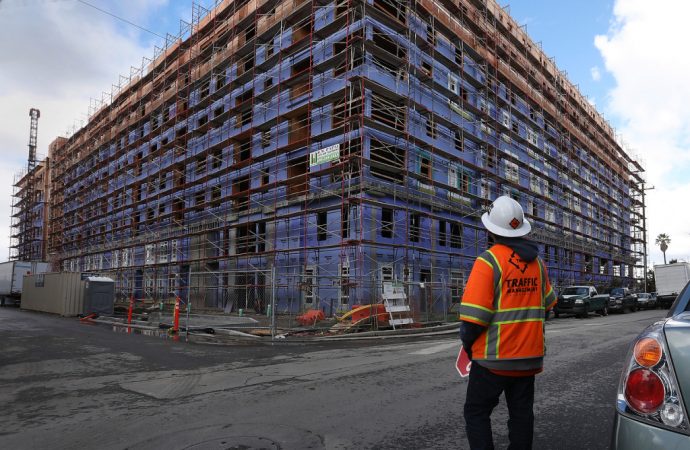 San Jose has made history this week by becoming the largest U.S. city to ban natural gas from nearly all new construction, looking to all-electric infrastructure as the city’s latest tool to combat climate change. But a controversial exemption that allows certain facilities to continue operating on fossil fuels has some environmental advocates concerned that…

San Jose has made history this week by becoming the largest U.S. city to ban natural gas from nearly all new construction, looking to all-electric infrastructure as the city’s latest tool to combat climate change.

But a controversial exemption that allows certain facilities to continue operating on fossil fuels has some environmental advocates concerned that San Jose will set a bad example for other cities that might want to follow in its footsteps.

“I am confident that we are taking a huge step here that is going to get us much, much closer to our climate goals,” Mayor Sam Liccardo said during Tuesday’s virtual city council meeting.

That same night, the Oakland City Council voted unanimously to ban natural gas in newly constructed apartment and commercial buildings. San Jose and Oakland join more than three dozen cities with similar all-electric building mandates, including the Bay Area’s San Francisco, Menlo Park, and Berekely, which was the first city in the country to enact such a regulation last year.

Although natural gas is more environmentally friendly than other fossil fuels such as coal, the energy source now seen by many as a poor substitute for electricity. Removing natural gas from nearly all new buildings in San Jose will decrease greenhouse gas emissions in the city and improve both indoor and outdoor air quality, according to San Jose’s chief sustainability officer Kerrie Romanow.

The city’s newly-expanded natural gas ban does not apply to existing homes or commercial buildings. Hospitals and new dwelling units attached to an existing home will be exempt, and food-service establishments and manufacturing facilities facing financial difficulties can apply for “limited hardship exemptions” through the end of 2022.

The particular exemption that drew serious backlash from San Jose students, residents and environmental advocates, however, dealt with facilities that generate and store energy on-site. Under the ordinance passed Tuesday, those facilities would not be subject to rely solely on electric energy until Dec. 31, 2024.

The exemption was added just one day before the council was expected to take up the proposed ban earlier this month, forcing a delay on the vote for two weeks. It was prompted by alarms raised at the last minute by Bloom Energy, a publicly-traded fuel cell company based out of San Jose that sued over a similar ban in Santa Clara earlier this year and that Liccarrdo’s friend and former Silicon Valley Leadership Group CEO Carl Guardino now serves as an executive vice president at.

The company’s fuel cells can provide critical backup power during power outages such as PG&E’s power safety shutoffs that left hundreds of thousands of Bay Area residents without power this fall. In a letter to the city, Guardino argued that intermittent renewable resources must be paired with reliable generation such as the Bloom boxes to “keep the lights on and business running.”

The issue for environmentalists, though, is that the fuel cells generate electricity using mainly natural gas, run at all hours of the day — not just during power outages — and emit more than three times as much carbon dioxide as power from the city’s utility, San Jose Clean Energy, according to city and Bloom figures.

Olivia Walker of the Natural Resources Defense Council called the exemption for companies like Bloom an “unnecessary and counterproductive” loophole that would allow “unfettered use of fuel cells powered by fracked gas.”

“This continuous use of gas-powered fuel cells would compromise the local and global benefits of San Jose’s increasingly clean fuel mix and even create demand for a new fossil gas infrastructure,” Walker said during the virtual meeting.

Linda Hutchins-Knowles of Mothers Out Front Silicon Valley echoed the same sentiment, saying that Bloom’s fuel cells “undermine our ability to achieve our greenhouse gas reduction goals” and potentially lead other cities to follow down the city’s misguided path. Hutchins-Knowles urged the city to pass the natural gas ban without the exemption until they could more deeply research and understand the effects of allowing companies like Bloom to get bypass the regulation.

Still, the majority of the council sided with Mayor Liccardo who argued that guaranteeing companies have an uninterrupted supply of energy in spite of the region’s unreliable power grid was essential.

“We’re pushing folks toward an electric grid that is not reliable and not dependable,” the mayor said. “We hope all that changes in the years ahead, but PG&E is many years and tens of billions of dollars away from fixing its problems.”

Romanow, the city’s chief sustainability officer who proposed the parameters of the time-limited exemption, said she saw it as a concession to allow “a little bit more natural gas than we’d honestly prefer” in order to increase density and development in San Jose, and therefore providing “economic prospectively to all our community through job creation and getting people out of their vehicles.”