To fight the scourge of open offices, ROOM sells rooms 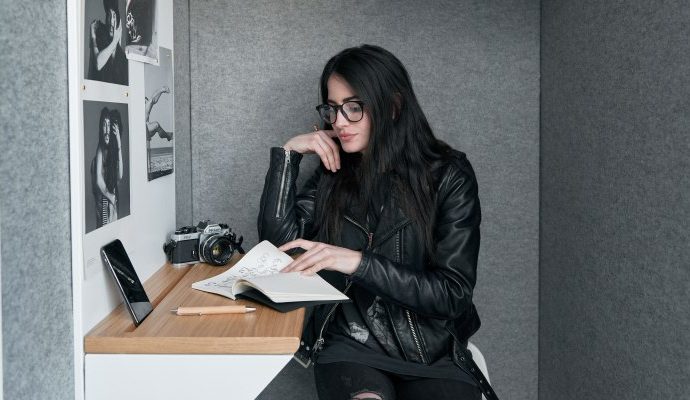 Noisy open offices don’t foster collaboration, they kill it, according to a Harvard study that found the less-private floor plan led to a 73 percent drop in face-to-face interaction between employees and a rise in emailing. The problem is plenty of young companies and big corporations have already bought into the open office fad. But…

Noisy open offices don’t foster collaboration, they kill it, according to a Harvard study that found the less-private floor plan led to a 73 percent drop in face-to-face interaction between employees and a rise in emailing. The problem is plenty of young companies and big corporations have already bought into the open office fad. But a new startup called ROOM is building a prefabricated, self-assembled solution. It’s the IKEA of office phone booths. 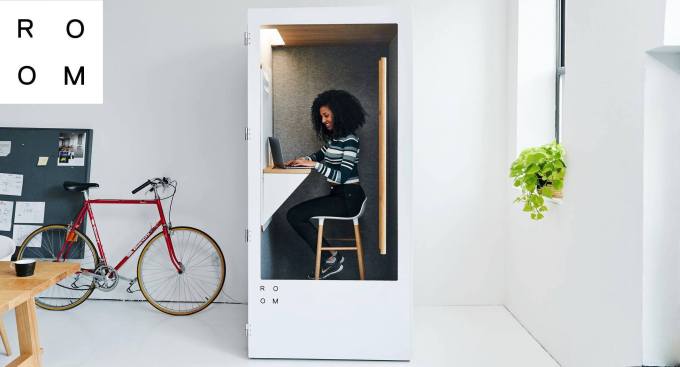 The $3,495 ROOM One is a sound-proofed, ventilated, powered booth that can be built in new or existing offices to give employees a place to take a video call or get some uninterrupted time to focus on work. For comparison, ROOM co-founder Morten Meisner-Jensen says, “Most phone booths are $8,000 to $12,000. The cheapest competitor to us is $6,000 — almost twice as much.” Though booths start at $4,500 from TalkBox and $3,995 from Zenbooth, they tack on $1,250 and $1,650 for shipping, while ROOM ships for free. They’re all dividing the market of dividing offices.

The idea might seem simple, but the booths could save businesses a ton of money on lost productivity, recruitment and retention if it keeps employees from going crazy amidst sales call cacophony. Less than a year after launch, ROOM has hit a $10 million revenue run rate thanks to 200 clients ranging from startups to Salesforce, Nike, NASA and JP Morgan. That’s attracted a $2 million seed round from Slow Ventures that adds to angel funding from Flexport CEO Ryan Petersen. “I am really excited about it since it is probably the largest revenue-generating company Slow has seen at the time of our initial Seed stage investment,” says partner Kevin Colleran. 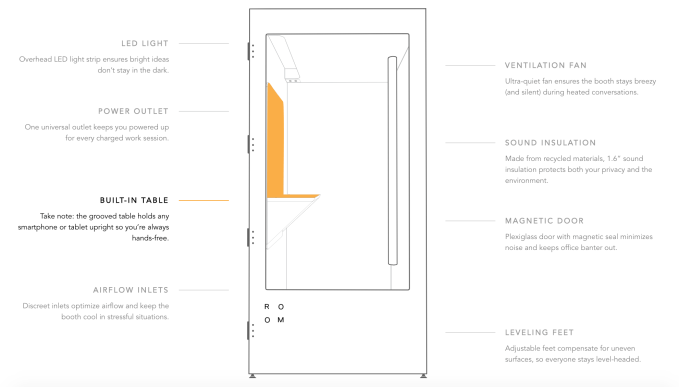 You might be asking yourself, enterprising reader, why you couldn’t just go to Home Depot, buy some supplies and build your own in-office phone booth for way less than $3,500. Well, ROOM’s co-founders tried that. The result was… moist.

Meisner-Jensen has design experience from the Danish digital agency Revolt that he started before co-founding digital book service Mofibo and selling it to Storytel. “In my old job we had to go outside and take the call, and I’m from Copenhagen, so that’s a pretty cold experience half the year.” His co-founder Brian Chen started Y Combinator-backed smart suitcase company Bluesmart, where he was VP of operations. They figured they could attack the office layout issue with hammers and saws. I mean, they do look like superhero alter-egos. 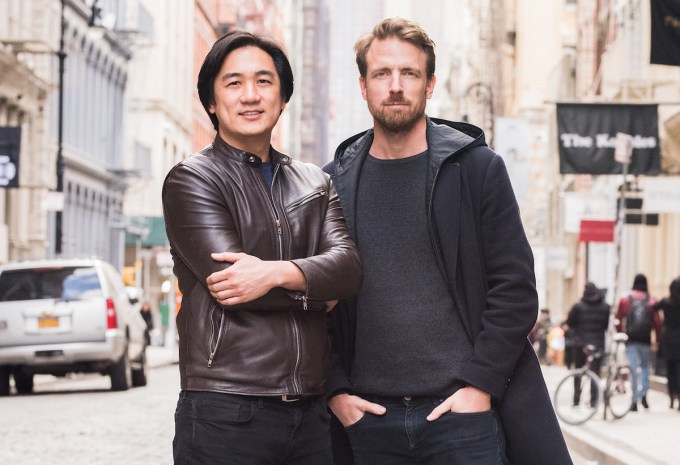 “To combat the issues I myself would personally encounter with open offices, as well as colleagues, we tried to build a private ‘phone booth’ ourselves,” says Meisner-Jensen. “We didn’t quite understand the specifics of air ventilation or acoustics at the time, so the booth got quite warm — warm enough that we coined it ‘the sweatbox.’ ”

With ROOM, they got serious about the product. The 10-square-foot ROOM One booth ships flat and can be assembled in less than 30 minutes by two people with a hex wrench. All it needs is an outlet to power its light and ventilation fan. Each is built from 1088 recycled plastic bottles for noise cancelling, so you’re not supposed to hear anything from outside. The box is 100 percent recyclable, plus it can be torn down and rebuilt if your startup implodes and you’re being evicted from your office.

The ROOM One features a bar-height desk with outlets and a magnetic bulletin board behind it, though you’ll have to provide your own stool. It’s actually designed not to be so comfy that you end up napping inside, which doesn’t seem like it’d be a problem with this somewhat cramped spot. “To solve the problem with noise at scale you want to provide people with space to take a call but not camp out all day,” Meisner-Jensen notes. 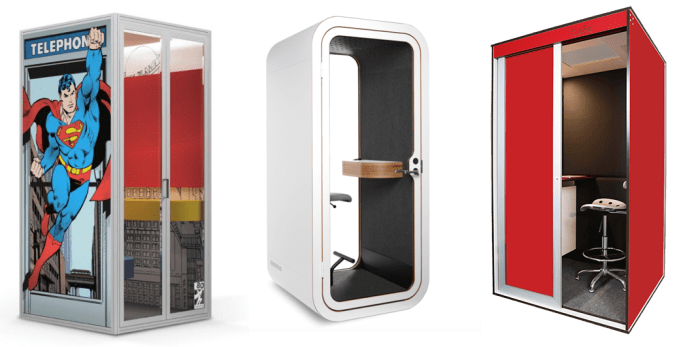 A place to get into flow

Couldn’t office managers just buy noise-cancelling headphones for everyone? “It feels claustrophobic to me,” he laughs, but then outlines why a new workplace trend requires more than headphones. “People are doing video calls and virtual meetings much, much more. You can’t have all these people walking by you and looking at your screen. [A booth is] also giving you your own space to do your own work, which I don’t think you’d get from a pair of Bose. I think it has to be a physical space.”

But with plenty of companies able to construct physical spaces, it will be a challenge for ROOM to convey the subtleties of its build quality that warrant its price. “The biggest risk for ROOM right now are copycats,” Meisner-Jensen admits. “Someone entering our space claiming to do what we’re doing better but cheaper.” Alternatively, ROOM could lock in customers by offering a range of office furniture products. The co-founder hinted at future products, saying ROOM is already receiving demand for bigger multi-person prefab conference rooms and creative room divider solutions. 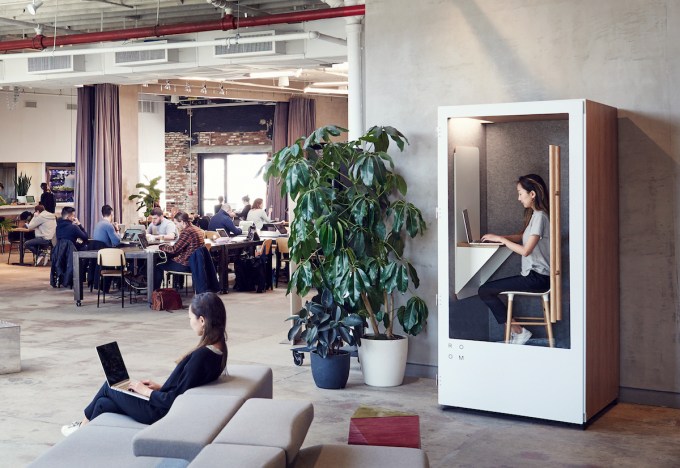 The importance of privacy goes beyond improved productivity when workers are alone. If they’re exhausted from overstimulation in a chaotic open office, they’ll have less energy for purposeful collaboration when the time comes. The bustle could also make them reluctant to socialize in off-hours, which could lead them to burn out and change jobs faster. Tech companies in particular are in a constant war for talent, and ROOM Ones could be perceived as a bigger perk than free snacks or a ping-pong table that only makes the office louder.

“I don’t think the solution is to go back to a world of cubicles and corner offices,” Meisner-Jensen concludes. It could take another decade for office architects to correct the overenthusiasm for open offices despite the research suggesting their harm. For now, ROOM’s co-founder is concentrating on “solving the issue of noise at scale” by asking, “How do we make the current workspaces work in the best way possible?”