EBMUD to charge more for water, but won’t force customers to use less 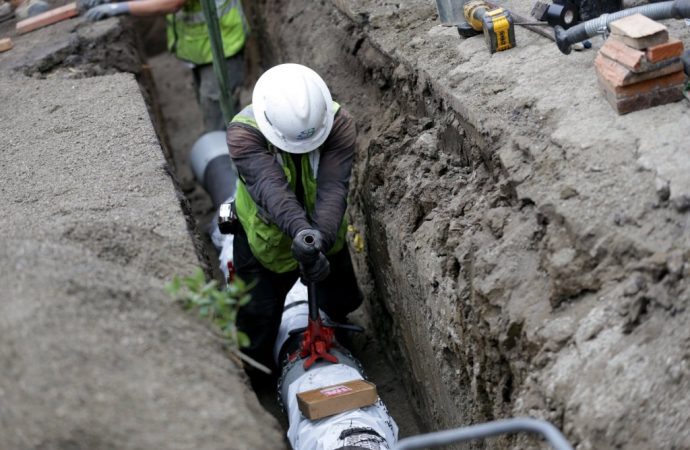 Higher bills will soon be on the way for the roughly 1.4 million people who get their water from the East Bay Municipal Utility District, but at least for now they won’t be required to cut their water use despite the drought. Beginning July 1, the agency will charge customers 4% more for both water…

Higher bills will soon be on the way for the roughly 1.4 million people who get their water from the East Bay Municipal Utility District, but at least for now they won’t be required to cut their water use despite the drought.

Beginning July 1, the agency will charge customers 4% more for both water and sewer services. And a year later, on July 1, 2022, the rate will climb another 4%.

The district’s board of directors unanimously approved the rate increases at its meeting Tuesday as part of the $2.25 billion budget it adopted for the next two fiscal years.

Unlike some other Bay Area water agencies, however, the EBMUD board decided it won’t order customers to cut their water use. The board in late April declared a “stage 1 drought” in the district and asked customers to voluntarily use 10% less water than they have been.

EBMUD has previously said that because its customers were using about 13% less water than during the last serious drought in 2013 and its reservoirs are 69% full, it should be able to get by with voluntary water reductions.

The Santa Clara Valley Water District board, on the other hand, is expected on Wednesday to declare a water shortage emergency and ask cities and private water companies in Santa Clara County to cut water use 33% from 2013 levels.

Similar drastic measures already have started in the North Bay, where the Marin Municipal Water District in April banned its 190,000 customers from washing cars at home, washing sidewalks and driveways and refilling decorative fountains.

Should drought conditions worsen, EBMUD staff said the board could later mandate water use cuts and even tack on water surcharges of up to 25% to help cover costs when less water is used.

“Unless the rains start again, we could well be in a position where we could be enacting a surcharge on water use as well…because we’re headed into a drought,” board member Marguerite Young said.

The district, one of the largest water providers in the state, serves customers in portions of Alameda and Contra Costa counties, from as far north as Crockett down to San Lorenzo, including Oakland and Berkeley, and east from the Bay’s edge to Walnut Creek and the San Ramon Valley.

The district also provides wastewater treatment services to about 740,000 customers in a roughly 90-square-mile area along the Bay’s eastern shore, from Richmond to Oakland.

Under the new rate structure, the average residential customer in a single family home — which uses about 200 gallons a day — would pay $2.53 more per month beginning July 1, from $63.47 to $66, according to a staff reports.

That wouldn’t be all, though. The district also will increase the “wet weather facilities charge” in wastewater customers’ annual property tax bill. That money is supposed to help the district improve its “capacity to collect and treat all wastewater flows during rainy weather.”

Some residents who called into the board’s virtual meeting opposed the increases, especially in light of hardships caused by the coronavirus pandemic, although one person wrote to suggest the drought should prompt the district to boost rates even higher.

“This is a time when we are in a financial crisis,” Oakland resident Julie Mills told the board in opposing the rate hikes. She noted governments have banned rental evictions and offered other kinds of relief during the pandemic.

“It’s not the time to be increasing rates,” Mills said.

District staff and board members defended the increases as necessary to help maintain and improve “a vast network of pipelines, storage reservoirs, and treatment facilities” that are decades old.

The district says about 64% of its two-year budget will be allocated to “building and paying for capital-investment work.”

“These rate increases are less than what we’ve had in the past,” Young said.

“We’ve taken great care to not have an excessive rate increase, but we won’t let our infrastructure fall apart,” board member Andy Katz added.