As a mother in prison, Elizabeth Holmes faces an agonizing separation from son 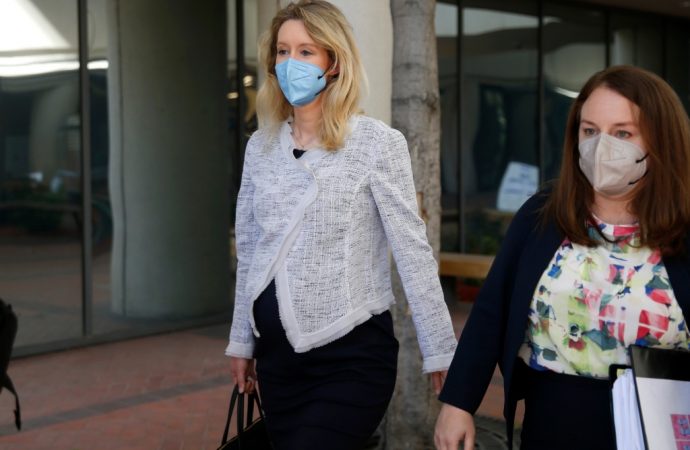 During Elizabeth Holmes’ trial, prosecutors portrayed the Silicon Valley wunderkind as the mastermind of a multimillion-dollar fraud scheme, but the stylish diaper-bag backpack she toted to court was a reminder that she’s also the new mother to a 6-month-old son. Holmes’ maternal role will weigh heavily on her and her baby when it comes time…

During Elizabeth Holmes’ trial, prosecutors portrayed the Silicon Valley wunderkind as the mastermind of a multimillion-dollar fraud scheme, but the stylish diaper-bag backpack she toted to court was a reminder that she’s also the new mother to a 6-month-old son.

Holmes’ maternal role will weigh heavily on her and her baby when it comes time for sentencing on four counts of fraud later this year. Some legal experts say the Theranos founder, 37, could face more than a decade in federal prison, meaning that she and her son, born July 10, will face an agonizing separation experienced by an estimated 1.6 million women who are locked up over the course a year in county jails and state and federal prisons, according to the Prison Policy Initiative. Some 57,000 women in state and federal prisons have minor children, according to a 2016 U.S. Justice Department survey.

Women who’ve been incarcerated describe a harrowing reality for any mother who must leave a child behind, even a mother who’s rich, White and famous, as Holmes is. They talk about the limited opportunities for visits and physical contact. They also illustrate the lifelong trauma that children can suffer when they lose close, regular proximity to their primary caregiver at crucial times in their physical and emotional development.

Andrea James said she was on “the brink of insanity” from postpartum depression when she surrendered to serve two years at the federal prison in Danbury, Connecticut, in 2010, six months after giving birth to the youngest of her four children.

“It was like a kick in the stomach, being separated from my son,” said James, a former Boston-area attorney who was convicted of wire fraud. “This child doesn’t understand, this infant who was in your body and slept up against you and breast-fed. You are there one day and the next day you are gone.”

James now heads the National Council For Incarcerated and Formerly Incarcerated Women and Girls. Like others, she cites extensive research showing that having an incarcerated parent is an “adverse” event for a child, which can lead to depression, anxiety, aggression and an increased risk of trouble in school and involvement in the criminal justice system.

Danielle Metz’s son and daughter were 7 and 3 when she started three life sentences, plus 20 years, at Dublin’s Federal Correctional Institution, for cocaine distribution. The New Orleans native said she’s fortunate her children grew up “making good choices” because her sister raised them, moving to Stockton so they could see her at least once a month.

“Me bonding with my children was very important to my sister,” said Metz. But then, as now, the visits at the Dublin prison took place in a large, crowded institutional room with children often crying when they have to leave their mothers.

“There was a toy area where you could maybe sit with your child, but, you know, at 3 and 7, it was hard to explain my sentence to them,” continued Metz, who was granted clemency by President Obama in 2016. She’s the clemency director for James’ National Council and a community health worker for a clinic for formerly incarcerated people. “Even as they got older, it was hard to explain why I wasn’t coming home with them and if not, when will I be coming with them?”

For the 23 years she was incarcerated, Metz missed her child-rearing day-to-day moments: Taking them to school, soothing them when they were sick or cheering them on in their many accomplishments. She remembers asking her daughter to wear her prom dress for one visit.

“As my daughter got older, she didn’t really like to come because certain guards would give (visitors) a hard time,” said Metz, describing the “dark cloud” of a prison visiting room. She had to undergo a strip search just before before the visits, and guards might intervene if they “see you and your children playing and having too much fun.”

Holmes also can expect to endure strip searches, prison visit atmosphere and long lines for a pay phone to call home. But as James said, “You can’t mother from a pay phone.” The BOP offers two residential programs for mothers and their babies, but it’s only for women who have just given birth and for a limited number of months.

As a non-violent offender, it’s possible that Holmes could end up in Dublin’s minimum-security satellite camp because the BOP tries to house prisoners within 500 miles of home, said Holli Coulman, a prison consultant who served time in federal prison.

Under the very best of circumstances, Holmes might be able to see her son several hours once or twice a week, Coulman said. However, that’s not the situation right now, when outbreaks of COVID-19 have forced Dublin and other federal prisons to suspend visits indefinitely.

In other ways, Holmes’ affluence gives her advantages that are unknown to the vast majority of incarcerated mothers. Many are women of color whose poverty or abusive backgrounds led them to become “entangled in the criminal justice system,” James said. They are typically locked up upon arrest, unlike Holmes and other well-heeled defendants, who can post bond or pay attorneys to argue they are not flight risks. Holmes has reportedly been living with her partner, Billy Evans, and their son at a $135 million estate in Woodside.

It’s likely that Holmes will be be able to remain free until after her sentencing, which is expected to take place after Labor Day, said former federal prosecutor Neama Rahmani. She’ll also be given a date to report to prison, allowing her to spend more time with her baby and get her affairs in order. With Holmes’ attorneys likely to appeal her conviction, she could also be free pending her appeal, delaying her incarceration another year or so, added former Santa Clara County prosecutor Steven Clark.

But if or when Holmes goes to prison, her family probably won’t struggle nearly as much as other women to see her child for weekend visits. James, who came from a relatively affluent Black family, said her husband was able make the six-hour, round-trip drive every weekend so that she could see her son and 12-year-old daughter. Her parents also helped. “I didn’t have to worry where my children were going to be, if my children were going to be taken care of,” she said.

That wasn’t the experience of other mothers James met in prison. “Some were lucky to even know who has their children,” she said. Others had children thousands of miles away, living with relatives who couldn’t afford to bring the children to see their mothers. More horrifically, some mothers lost custody and all communications with children who had to go into foster care and were eventually adopted out.

A mother James met her first week in prison offered stark advice for surviving two years without her children, saying she had to “forget” them and “put them on the shelf.” James said: “What kind of country does that does that to mothers and children?”