No exodus of California renters as 2022 starts 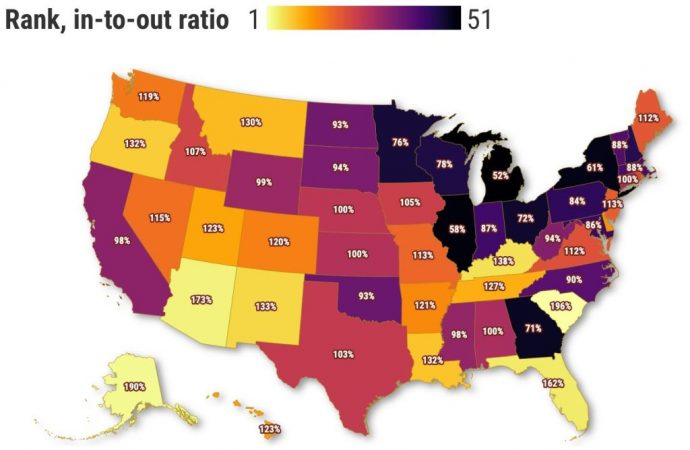 ”Survey says” looks at various rankings and scorecards judging geographic locations while noting these grades are best seen as a mix of artful interpretation and data. Buzz: There was no exodus of renters from California to start 2022 — as far as their online search habits show. Source: My trusty spreadsheet reviewed first-quarter migration stats…

”Survey says” looks at various rankings and scorecards judging geographic locations while noting these grades are best seen as a mix of artful interpretation and data.

Buzz: There was no exodus of renters from California to start 2022 — as far as their online search habits show.

Source: My trusty spreadsheet reviewed first-quarter migration stats from ApartmentList.com. The website analyzed 1.7 million online searches for apartments by state, including what share of users was looking to exit and how much local searching is coming from elsewhere in the U.S.

Like I said numerous times before — few people leave California and even fewer move here.

To start 2022, 15.9% of Californians seeking a new place to rent looked out of state. That was the second-lowest share among the states. Arizona was the most popular place for Golden Staters to look for apartments.

So, where was the top spot for “outbound” relocations — those potential out-of-state exits?

The District of Columbia had 71% of its apartment seekers looking outside the district. Next was Vermont at 55%, Wyoming at 52%, New Hampshire at 50%, and West Virginia at 49%.

Next, ponder those “inbound” moves — places with most apartment searches that could lead to more new neighbors.

The biggest share of inbound looks was also D.C., with 65% of its searches coming from outside the district. Next was Alaska and Montana at 53%, Wyoming at 52%, and South Carolina at 51%.

The only state with fewer inbound searches than California was Michigan at 14%, then Texas and Ohio at 18% and Illinois at 19%. By the way, Florida was 10th lowest at 25%.

Six states — Arizona, Hawaii, Nevada, Texas, Utah, and Washington — had more Californians looking at their apartments than residents of any other state.

Searches are by no means guaranteed relocations.

And please remember, roughly two-thirds of these online apartment hunts are looking at close-to-home, intrastate moves.

Plus, some online looks are aspirational — people simply dream of new digs.

So you can look at this eyeballing metric as sort of a popularity yardstick. Consider my spreadsheet’s ratio of inbound searches (think potential arrivals) compared to its outbound online research (think possible departures).

This stat suggests South Carolina is the renter’s top choice. It led the nation with a 196% greater share of out-of-staters looking to move to the Palmetto State vs. its residents searching elsewhere in the U.S.

Least popular? Michigan. renters contemplating a move into the Wolverine State are just 52% of those seeking to leave. Then came Illinois at 58%, New York at 61%, Georgia at 71%, and Ohio at 72%.

With all the talk of rent affordability these days, it’s a bit surprising that folks appear to be searching more intensely in pricier markets, according to US Census Bureau cost data.

Slicing the states into thirds by their popularity score, my spreadsheet found the 17 trendiest states had a median $1,097 monthly rent compared with the 17 out-of-favor states at $999.

Jonathan Lansner is the business columnist for the Southern California News Group. He can be reached at jlansner@scng.com