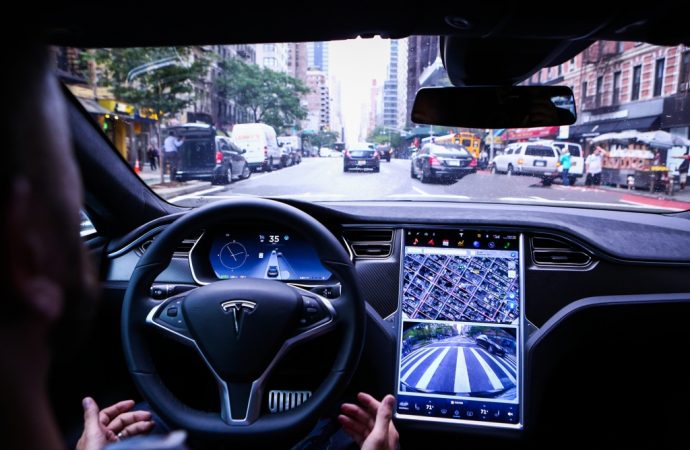 By Matt McFarland | CNN Business “Full self-driving,” the controversially named driver-assist feature from Tesla, may have finally met its match. Tesla’s foil isn’t a silver-haired US Senator, world-class autonomous driving experts, or some of the country’s preeminent safety advocates. They’ve all warned that “full self-driving” isn’t really full self-driving. The technology is designed to…

“Full self-driving,” the controversially named driver-assist feature from Tesla, may have finally met its match.

Tesla’s foil isn’t a silver-haired US Senator, world-class autonomous driving experts, or some of the country’s preeminent safety advocates. They’ve all warned that “full self-driving” isn’t really full self-driving. The technology is designed to navigate local roads with steering, braking and acceleration, but it requires an attentive human driver who’s ready to take control and correct the system, which “may do the wrong thing at the worst time,” Tesla warns.

But while these critics may have the traditional bully pulpit of the Senate or other institutions, they have no real power to change any policy on their own. An actual impact may instead come from an unglamorous public agency, one that many Americans think of as only capable of offering customers long wait times: the Department of Motor Vehicles. The California DMV has become the first US government entity to formally move against the naming of “full self-driving.”

Automotive regulation has traditionally fallen to the National Highway Traffic Safety Administration, part of the Department of Transportation, and Congress, which can push NHTSA to regulate specific things like driver-assist technology. But NHTSA and Congress have spent recent years swept away in the excitement and lobbying surrounding a more eye-catching technology — fully autonomous vehicles.

NHTSA has even exempted some robotaxis from its safety standards, and described many potential benefits of these technologies, including improved quality of life, safer roads, shorter commutes, lower energy usage and more access to jobs. It’s claimed in the past that leaving “breathing room for innovation” led to the development of technologies like air bags. Self-driving cars and trucks could, in theory, revolutionize transportation and save millions of lives if crashes become rarer, as supporters of the technology have predicted.

The US House of Representatives passed a law related to self-driving cars. It hasn’t acted on the more pedestrian driver-assist technologies.

NHTSA has no standards for these systems, which has effectively left automakers like Tesla to decide what’s safe enough. But there are strong signs in the last year that NHTSA is shifting some of its attention to driver-assist technologies. It announced last summer, for instance, that automakers must report driver-assist crashes.

NHTSA has also cited its powers to protect the public from motor vehicle risks that it received when created in 1970.

“Given the rapid evolution of these technologies and testing of new technologies and features on publicly accessible roads, it is critical for NHTSA to exercise its robust oversight over potential safety defects,” it said.

NHTSA has even taken steps toward standards for one driver-assist feature, automatic emergency braking. But the first major regulatory impact may be from that unlikely candidate, the California Department of Motor Vehicles.

Most Americans’ interactions with their own state DMV is limited to dreary, underfunded offices with long lines and beleaguered staff. Most people are there to fill out forms and pay fees for various bureaucratic duties that the agency undertakes.

But that is not the entirety of the California DMV.

Uber provoked the DMV in 2017 when it tested autonomous vehicles in San Francisco without a required DMV permit. The DMV revoked Uber’s vehicles’ registrations in response, and Uber pulled its cars from San Francisco streets. (Uber fled to the looser regulations of Arizona, but was kicked out of the state in 2018 after one of its test vehicles was involved in a high-profile fatal crash. It then sold its robotaxi business in 2020.)

Now, the California DMV is flexing the type of muscle that could force Tesla to drop the name “full self-driving,” according to autonomous driving experts.

The DMV recently filed a complaint that says Tesla’s description of its driver-assist technologies, Autopilot and “full self-driving,” is deceptive and grounds for suspending or revoking its license to sell motor vehicles in the state. The risk of losing such a license may force Tesla’s hand. The automaker was founded in California, it’s made most of its cars in California, and its vehicles are among the best-selling in California. “Full self-driving” is even designed to be at its best in California’s San Francisco Bay Area.

Tesla’s use of the words “full self-driving” and “Autopilot,” as well as its descriptors of the technology on its website, suggest the vehicles are autonomous, when they aren’t, the DMV says in its complaint.

Tesla has long qualified the limits of its systems with disclaimers. But the DMV says in its complaint that one Tesla disclaimer “contradicts the original untrue or misleading labels and claims, which is misleading, and does not cure the violation.”

It’s unclear how Tesla and the DMV’s differences might be resolved, and the conflict could include lengthy litigation.

A settlement could include changes to how Tesla talks about the systems on its website, a promise to avoid similar behavior in the future, or even new names for its products, according to Bryant Walker Smith, a professor at the University of South Carolina law school who researches autonomous vehicles.

Tesla claimed in 2016 that all its new vehicles had the hardware capability for “full self-driving,” and it would soon offer complementary software for the cars to drive themselves. Tesla CEO Elon Musk has said every year from 2015 to 2022 that self-driving Teslas were probably a year or two away. Tesla has released a beta version of “full self-driving” to more than 100,000 drivers, but the software requires constant vigilance as it sometimes makes dangerous decisions.

This is not the first fight over this type of language. A German court ruled in 2020 that Tesla’s language was misleading, which the automaker appealed last year.

Waymo, the self-driving subsidiary of Google’s parent company, stopped using the term “self-driving” in 2021, saying that misuse by other automakers was giving the public a false impression of its capabilities. Waymo began referring to its robotaxis as “fully autonomous.” Waymo, which operates robotaxis in the Phoenix area, does not need a human in the driver’s seat to ensure safe operation.

The California DMV’s actions are officially limited to the state, but the impact could be much greater. It’s routine for California to lead on regulations and for other states to follow, such as vehicle emission standards. California’s large population makes tailoring vehicles just for that state too expensive for most automakers.

“Once you talk about one state investigating, you could talk about 50 states potentially investigating,” said Smith, adding that it will become easier politically and factually. “They’re not putting their necks out.”

Tesla did not respond to a request for comment.