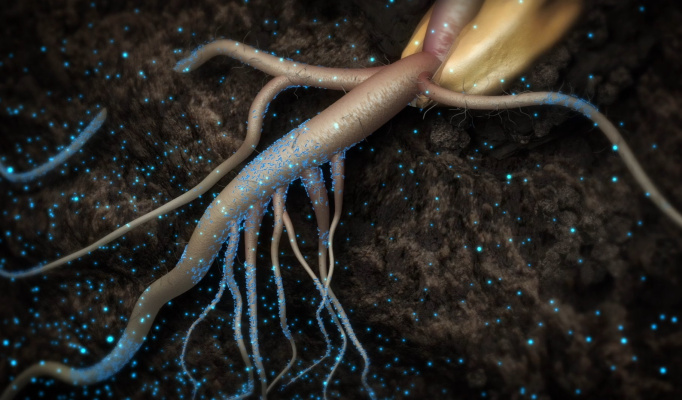 Pivot Bio makes fertilizer — but not directly. Its modified microorganisms are added to soil and they produce nitrogen that would otherwise have to be trucked in and dumped there. This biotech-powered approach can save farmers money and time and ultimately may be easier on the environment — a huge opportunity that investors have plowed…

Pivot Bio makes fertilizer — but not directly. Its modified microorganisms are added to soil and they produce nitrogen that would otherwise have to be trucked in and dumped there. This biotech-powered approach can save farmers money and time and ultimately may be easier on the environment — a huge opportunity that investors have plowed $430 million into in the company’s latest funding round.

Nitrogen is among the nutrients crops need to survive and thrive, and it’s only by dumping fertilizer on the soil and mixing it in that farmers can keep growing at today’s rates. But in some ways we’re still doing what our forebears did generations ago.

“Fertilizer changed agriculture — it’s what made so much of the last century possible. But it’s not a perfect way to get nutrients to crops,” said Karsten Temme, CEO and co-founder of Pivot Bio. He pointed out the simple fact that distributing fertilizer over a thousand — let alone ten thousand or more — acres of farmland is an immense mechanical and logistical challenge, involving many people, heavy machinery and valuable time.

Not to mention the risk that a heavy rain might carry off a lot of the fertilizer before it’s absorbed and used, and the huge contributions of greenhouse gases the fertilizing process produces. (The microbe approach seems to be considerably better for the environment.)

Yet the reason we do this in the first place is essentially to imitate the work of microbes that live in the soil and produce nitrogen naturally. Plants and these microbes have a relationship going back millions of years, but the tiny organisms simply don’t produce enough. Pivot Bio’s insight when it started more than a decade ago was that a few tweaks could supercharge this natural nitrogen cycle.

“We’ve all known microbes were the way to go,” he said. “They’re naturally part of the root system — they were already there. They have this feedback loop, where if they detect fertilizer they don’t make nitrogen, to save energy. The only thing that we’ve done is, the portion of their genome responsible for producing nitrogen is offline, and we’re waking it up.”

Other agriculture-focused biotech companies like Indigo and AgBiome are also looking at modifying and managing the plant’s “microbiome,” which is to say the life that lives in the immediate vicinity of a given plant. A modified microbiome may be resistant to pests, reduce disease or offer other benefits.

It’s not so different from yeast, which as many know from experience works as a living rising agent. That microbe has been cultivated to consume sugar and produce a gas, which leads to the air pockets in baked goods. This microbe has been modified a bit more directly to continually consume the sugars put out by plants and put out nitrogen. And they can do it at rates that massively reduce the need for adding solid fertilizer to the soil.

“We’ve taken what is traditionally tons and tons of physical materials, and shrunk that into a powder, like baker’s yeast, that you can fit in your hand,” Temme said (though, to be precise, the product is applied as a liquid). “All of a sudden managing that farm gets a little easier. You free up the time you would have spent sitting in the tractor applying fertilizer to the field; you’ll add our product at the same time you’d be planting your seeds. And you have the confidence that if a rainstorm comes through in the spring, it’s not washing it all away. Globally about half of all fertilizer is washed away… but microbes don’t mind.”

Instead, the microbes just quietly sit in the soil pumping out nitrogen at a rate of up to 40 pounds per acre — a remarkably old-fashioned way to measure it (why not grams per square centimeter?), but perhaps in keeping with agriculture’s occasional anachronistic tendencies. Depending on the crop and environment, that may be enough to do without added fertilizers at all, or it might be about half or less.

Whatever the proportion provided by the microbes, it must be tempting to employ them, because Pivot Bio tripled its revenue in 2021. You might wonder why they can be so sure only halfway through the year, but as they are currently only selling to farmers in the northern hemisphere and the product is applied at planting time early in the year, they’re done with sales for the year and can be sure it’s three times what they sold in 2020.

The microbes die off once the crop is harvested, so it’s not a permanent change to the ecosystem. And next year, when farmers come back for more, the organisms may well have been modified further. It’s not quite as simple as turning the nitrogen production on or off in the genome; the enzymatic pathway from sugar to nitrogen can be improved, and the threshold for when the microbes decide to undertake the process rather than rest can be changed as well. The latest iteration, Proven 40, has the yield mentioned above, but further improvements are planned, attracting potential customers on the fence about whether it’s worth the trouble to change tactics.

The potential for recurring revenue and growth (by their current estimate they are currently able to address about a quarter of a $200 billion total market) led to the current monster D round, which was led by DCVC and Temasek. There are about a dozen other investors, for which I refer readers to the press release, which lists them in no doubt a very carefully negotiated order.

Temme says the money will go toward deepening and broadening the platform and growing the relationship with farmers, who seem to be hooked after giving it a shot. Right now the microbes are specific to corn, wheat and rice, which of course covers a great deal of agriculture, but there are many other corners of the industry that would benefit from a streamlined, enhanced nitrogen cycle. And it’s certainly a powerful validation of the vision Temme and his co-founder Alvin Tamsir had 15 years ago in grad school, he said. Here’s hoping that’s food for thought for those in that position now, wondering if it’s all worth it.